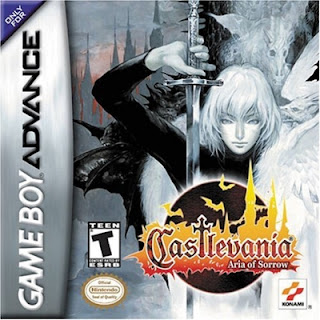 So today it’s time to talk about a game many consider the greatest GBA Castlevania ever made – Aria of Sorrow. When it was first announced in January 2003, I was cautiously excited about the game and pored over every screenshot and trailer released. But I never really got into the game when I bought it after it was released in May of that same year.

I really should have liked it more, because at the time, Aria of Sorrow was as close to Symphony of the Night as one could get. It was just by that time I had moved on from gaming in general and had started to pursue other interests. Still, this is a good time as any to rediscover the GBA games I’ve overlooked.

But having just finished Harmony of Dissonance, and finding myself at my wife’s parent’s house in the middle of the monsoon season with nothing to amuse myself with but for my DS lite and a copy of Aria of Sorrow. I had no choice (unless I wanted to play in the rain and become a flood victim) but to take the leap and jump straight into another Metroidvania game.

Let’s talk about the sound quality first. Instrument samples and synths have been hugely improved. No longer do the music sound like 8-bit chiptunes. Instead they sound more like real instruments, very similar to what was achieved with Circle of the Moon’s soundtrack. 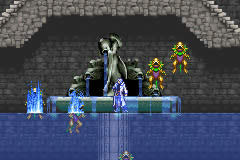 And so it was when I first played as Soma Cruz, teenage schoolboy and pretty boy protagonist of this game, I had to take a while to acclimatise to Aria of Sorrow’s controls which seemed to feel “slower” but once I discovered that it actually was very much akin to controlling Alucard in Symphony of the Night, it became much more acceptable and I learned to “unlearn” the constant zipping and dashing around of Harmony of Dissonance.

Soma Cruz’s similar controllability to Alucard is not the only thing in Aria of Sorrow that it shares with Symphony of the Night. There’s a lot in this game that was intentionally designed to make it not only similar to Symphony of the Night in terms of controllability but also in terms of Soma Cruz’s powers and abilities, which is managed by a system called “Tactical Souls”.

Tactical Souls allows Soma to collect “souls” occasionally dropped from creatures he has defeated and use their powers for himself. I like how when Soma collects a soul, the animation is very similar to when Alucard steals monster’s souls to heal himself in Symphony of the Night.

For you see, and I’m coming into spoiler territory here, Soma Cruz is very much alike to what Alucard is, except not quite. The game’s story delves into this quite a bit and if you want to know more, I suggest playing the game and finding out for yourself. (I pity those who’ve already played Dawn of Sorrow, the DS sequel to this game before playing this game as it spoils the major reveal of Aria of Sorrow right in the beginning.)

As with a lot of GBA games released during that era, there was a bit of a Pokémon influence in Aria of Sorrow. Because players could collect souls in the game, there were many chances to collect multiple souls of creatures. You only needed one, so what to do with the extra souls you amassed? Why you traded them via a GBA link cable of course! This was probably an interesting feature if you had a lot of friends who played Aria of Sorrow, but seeing as I’m the only one around playing the game, this feature was quite useless to me.

There’s only one castle this time but it’s a huge one so a second castle isn’t really missed. The castle has the classic setpieces expected in a Castlevania, like the opening hallway, the trademark steps to Dracula’s throne room and of course the clock tower. There are some new themed areas as well, like an unexpected pirate ship in a cave, perhaps a tribute to The Goonies. 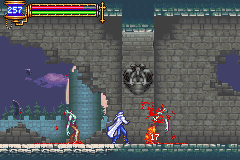 All these different locations are drawn in that beautiful 2D way that is becoming increasingly rare nowadays. The graphics are detailed, with many little touches making it seem like the castle is a real place. Light from the illuminated statue bounces of the walls in the sacred Save Room. Huge groups of bats fly in the background near the entrance. The clock tower in the background of the stairs that lead to Dracula’s throne room is rendered in 3D that’s not out of place, just like in Symphony of the Night. Monsters and enemies are incredibly detailed with an amazing amount of sprite animation. But hey, that’s always been the case with Castlevania games, especially the Metroidvania games made by IGA.

IGA himself wrote the scenario that moves the plot behind this game. Is that a good or bad thing? I dunno. It’s 2035, and Soma Cruz is visiting his friend Mina Hakuba (a not-very-subtle homage to Bram Stoker’s similarly named character in the novel, Dracula), who is the daughter of a caretaker of a Japanese shrine. It so happens the moment he visits is also the moment a solar eclipse is happening right over the shrine. Just as he steps into the shrine, he finds himself somehow teleported and trapped in Dracula’s castle that was trapped in a solar eclipse in 1999.

Yeah, the story’s a bit ridiculous but the backstory on what actually happened in 1999 is quite intriguing, and major points to IGA anyway for trying to make this game’s story different than the usual “random-Belmont-comes-to-kill-Dracula” plot.

Still, the story allows for several supporting characters to appear, including a Belmont and someone called “Arikado” who seems to have the similar powers to Soma. It’s never really told outright that Arikado is Alucard, but the game drops enough hints. It really doesn’t take a genius to figure it out. The Belmont character in this game is of course the secret unlockable character, very much like how you can unlock Richter in Symphony of the Night and Maxim in Harmony of Dissonance.

Aria of Sorrow, though having only one castle to explore, it took me much longer to complete than Harmony of Dissonance and it provides a better level of challenge. Still think it’s easy? No worries, there’s hard mode for the masochists. The game rewards you for collecting as many souls as you can and even provides a New Game+ mode, which allows the player to carry over souls from the previous game to a new one, ensuring high replayability.

Early on I said that many consider this the greatest GBA Castlevania ever made. Count me among them. It’s the game that comes closest to the benchmark, Symphony of the Night, and is highly replayable.

I’ll end this review by mentioning a song in the game that really stuck with me even after I finished it. The remix of the classic “Heart of Fire” song from the original NES Castlevania makes it into Aria of Sorrow during one of the battles, making it one of the most epic battles in a Castlevania game, probably more epic than when Alucard had to battle a brainwashed Richter in Symphony of the Night.


Do play this game if you ever have the chance to.
Castlevania Game Boy Advance Metroidvania Reviews