Tales of the Famiclone - How I Discovered the Micro Genius. 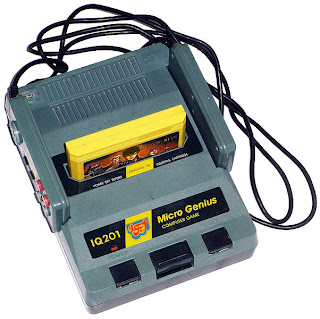 My first memory of video games was in 1990. I was 9 and my family had just moved in to a new house. Our neighbours had this new thing called a "Micro Genius" plugged into their TV and their kids were playing a game where you controlled some fat guy with a mustache.

The next game they gave me to try was called Battle City. I've never actually heard or seen anyone talk or write about this game but when I first played it I thought it was the bee's knees. You (or with a friend) controlled a tank and your mission was to protect your base from being attacked by enemy tanks. The base was represented by an eagle at the bottom of the screen and it was surrounded by a wall that could be shot down by either you or the enemies.

This was particularly important because if you weren't careful, your friend could actually sabotage you and shoot the damn eagle himself and thus end the game. You could also shoot your friend, but I think you could only disable him for a few seconds, which also made him vulnerable to enemy tanks. This was truly a game made for assholes.

I wasn't a asshole, but turns out the neighbours kids were (and they continued to maintain that level of prominence for years after) and so they kept shooting the eagle to kill my enjoyment of the game. You see, it was their parents who asked them to let me have a go at their Micro Genius when my family came over to visit. The kids were initially reluctant but they finally let me play albeit begrudgingly.

I had a few moments of fun at least and when we got home I asked my parents whether we could have one too. The answer was a firm NO.

Apparently my parents had earlier read an article somewhere about how this new thing called video games were out to destroy the minds of children and they had kept me safe from such harm right until that moment. There was no chance I’d be getting a video game system of any kind under their watch.

It wasn't until much later till I got my own video game system. It was still a famiclone but it wasn't a Micro Genius. But that's a story for another blog post.
Battle City Famiclone Famicom Mario Micro Genius NES Tales of the Famiclone